Chinese equities have faced significant pressure this week after the US-China trade war took a turn into the technology sector. With Huawei under fire from the United States, both US and Chinese tech stocks have displayed weakness as investors weigh the risk of retaliation alongside the immediate impact to the industry. Outside the direct hit to Huawei, component providers ranging from Microsoft to Micron have had their outlooks altered. The impending product ban has seen domestic tech stocks trade lower alongside their Chinese counterparts, weighing on the Shanghai Composite and by extension – emerging markets.

Chinese internet provider Baidu is among the largest losers, trading 13% lower since July 2018 when the initial tariffs were placed on China. Tencent and Alibaba have also fallen under pressure and are responsible for a sizable portion of the EEM emerging market ETF. The two Chinese tech companies are the first and second largest holdings of single stocks in the EEM ETF at 4.79% and 4.08% respectively. According to iShares, China accounts for 31.37% of the EEM ETF 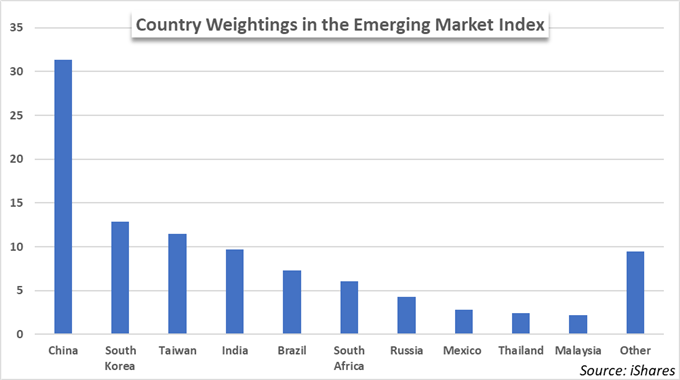 With that in mind, the weight commanded by a few Chinese heavy-weights has translated to weakness in the emerging markets ETF, EEM, which is down -6.8% since July 2018. The FXI ETF, which tracks the 50 largest Chinese stocks traded on the Hong Kong Stock Exchange, has faced a similar fate – down roughly -7%. 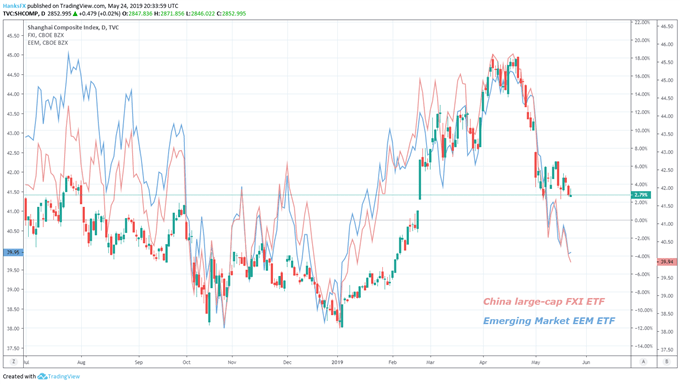 Interestingly, the Shanghai Composite has been able to climb during the same timeframe, up 2.8% since July 1. That said, it could be argued that large-cap Chinese stocks have born the brunt of the trade war impact as they have greater exposure to the United States and are thereby responsible for the Shanghai Composite’s lackluster return and the weakness in emerging markets. However, when looking at the return for other highly-weighted EEM members, South Korea is an even more egregious laggard. 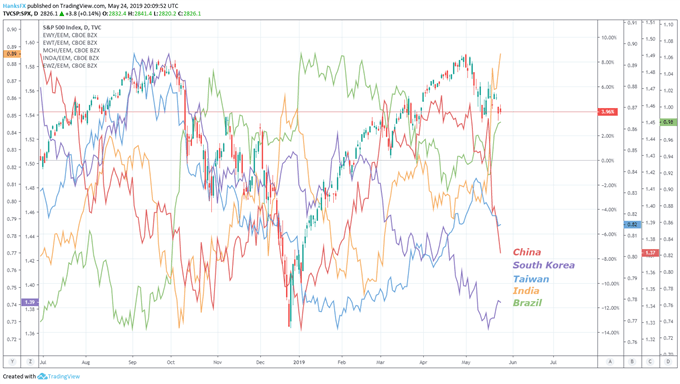 Although it is not directly in the crosshairs, equity performance would suggest South Korea has been hit in the crossfire of the US-China trade war. A slump in semiconductor demand and deteriorating economic data has seen the EWY ETF, a fund that grants exposure to South Korean equities, trade -18.2% lower in the year-to-date.

Further, the EWY offers the worst relative performance to the EEM ETF when compared to other highly weighted countries. Given its proximity and degree of trade with China, South Korea is likely feeling the pain of slowing Chinese growth – which could accelerate as the trade war drags on.

In the week ahead, further commentary on the trade war will be offered by the release of US advance goods trade balance on Thursday alongside the second print of US GDP. Also, due next week is Chinese manufacturing data on Friday. A poor print could see the weakness in Chinese stocks become more widespread and reflected in the Shanghai Composite, as much of the FXI ETF is made up of technology and financial stocks.

Read more: Will the Stock Market Crash in 2019?