The S&P 500 rallied on Wednesday as traders leave their desks and markets wind down for the Independence Day Holiday. Due to the conditions, volume has been drained and the potential for a tail-risk event is heightened. Despite the precarious landscape, Cboe’s volatility index (VIX) or “fear gauge,” is probing 2-month lows.

Over the last two years ending in June, the R-squared measure between the S&P 500 and the VIX has been statistically significant at 64% – but marginally weaker than it was from March to March. In other words, 64% of the movement in the VIX can be explained by a shift in the S&P 500. But over the last month, the dependency of the VIX on the S&P 500 has broken down. 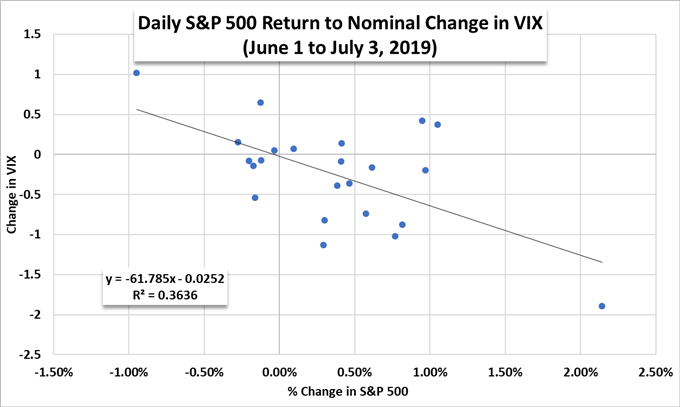 Since June 1, only 36% of the changes in the VIX can be explained by the underlying S&P 500. The relationship is noticeably beneath the longer-term 64% and when compared to the same span in the prior year, the difference is even more drastic – partially due to the number of days in which both the S&P 500 and the VIX climbed. 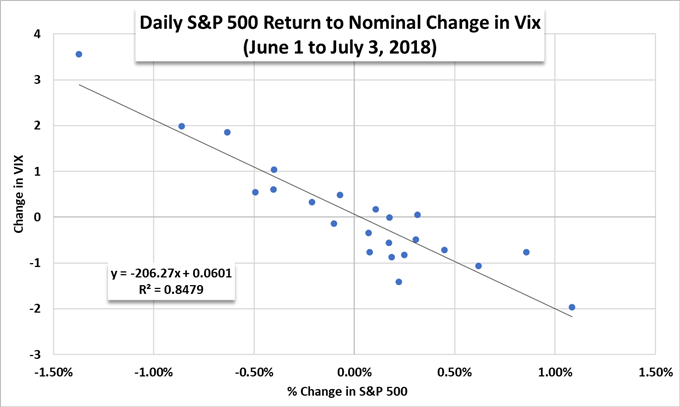 In June to July 3, 2018, the R-squared value between the two variables reveals that nearly 85% of the movement in the VIX could be attributed to the S&P 500 – a stark contrast to 2019 where the relationship stands at only 36%. One thing to note when analyzing the differences is the sample size. Given the timeframe is just a month, each outlier commands significantly greater influence over the final value. With that in mind, what does the weak relationship between the two mean for the S&P 500 moving forward with the VIX at such depressed levels?

First, one could argue recent weeks have been unusually risk-filled while the S&P 500 pressed to record highs simultaneously. Notable events in the past month include a Fed meeting, an ECB meeting, a Trump-Xi Summit in Osaka, Japan and Iran tensions. Evidently, there has been plenty cause for an elevated VIX – which has failed to materialize.

Despite the larger on-average price moves in June 2019, the concurrent change in the VIX was smaller than that of the move in 2018. This phenomenon suggests rampant complacency at present, with risky events and large price swings being met with minor movement in the VIX. That said, June 2018 had risk of its own – the advent of the US-China trade war.

At the time, investors were understandably on edge due to the extreme uncertainty brought about by the conflict. In the year since, the market has had time to digest the economic tug-of-war. Regardless, given the holiday conditions and the elevated potential for tail-risk events alongside a fresh record high in each of the S&P 500, Dow Jones and Nasdaq 100 – amid the longest bull run ever – traders should exercise caution and look to reduce risk exposure over the unusual trading hours.