Lookout! Peter-Parker Spider-Man will be back in this July for Spider-Man: Far From Home. In this upcoming chapter of the Spider-Man series, he plans to leave super heroics behind, and goes on a vacation around Europe together with his friends!

To welcome the debut of this exciting new movie, Hot Toys is elated to introduce the latest Spider-Man Cosbaby series for our fans and collectors! Each Cosbaby is approximately 8 – 10cm tall with bobble-head function whereas the Spider-Man Cosbaby (L) Bobble-Head is standing around 21cm tall.

Based on this upcoming release, the Spider-Man Cosbaby (S) Bobble-Head designed with additional magnetic function presents the wisecracking web crawler in his upgraded suit is absolutely adorable. Two alternative styles capturing Spidey in dynamic poses, including Wall Crawling Version and Web Swinging Version, are available as well. What’s more, a spectacular Spider-Man Cosbaby (L) Bobble-Head depicts the super hero in his new black and red suit will also tag along with this amazing series!

A highlight of the series is the Spider-Man and Nick Fury Cosbaby (S) Bobble-Head Collectible Set that brings Nick Fury, no-nonsense director of S.H.I.E.L.D. and the founder of the Avengers Initiative, in his iconic eye patch and black coat exclusively, arriving together with Spidey in classic landing pose.

Another set of two comes with Spider-Man in web shooting posture which comes with a Spider web ; and Mysterio whose identity is not unveil in the trailer yet!

Last but not least, a brand new duo set features Spider-Man in two remarkable suits, including the upgraded suit and all-black stealth suit will surely capture the eyes of fans! The Stealth Suit Version is exclusively featured in this set, so be sure to pick it up before it’s gone! 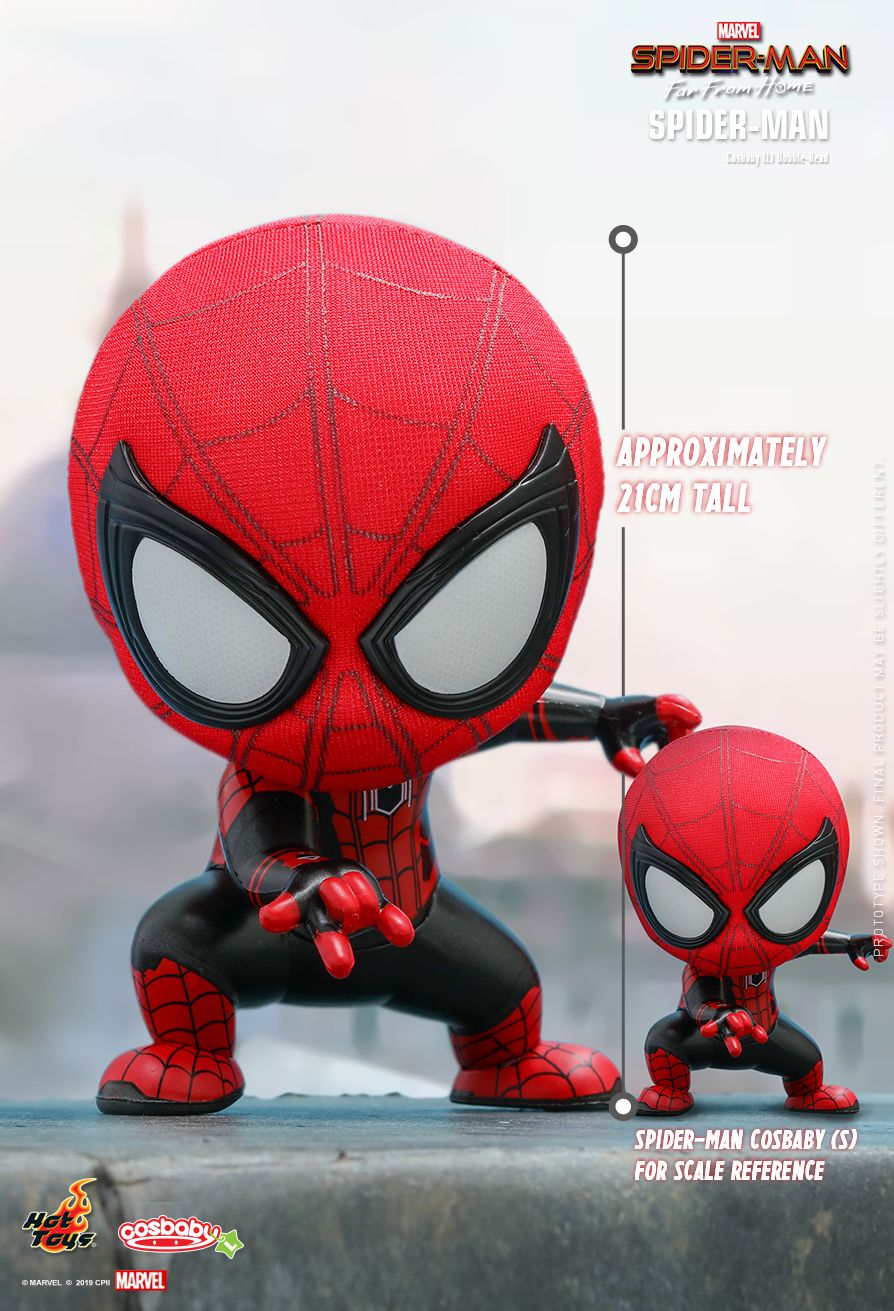 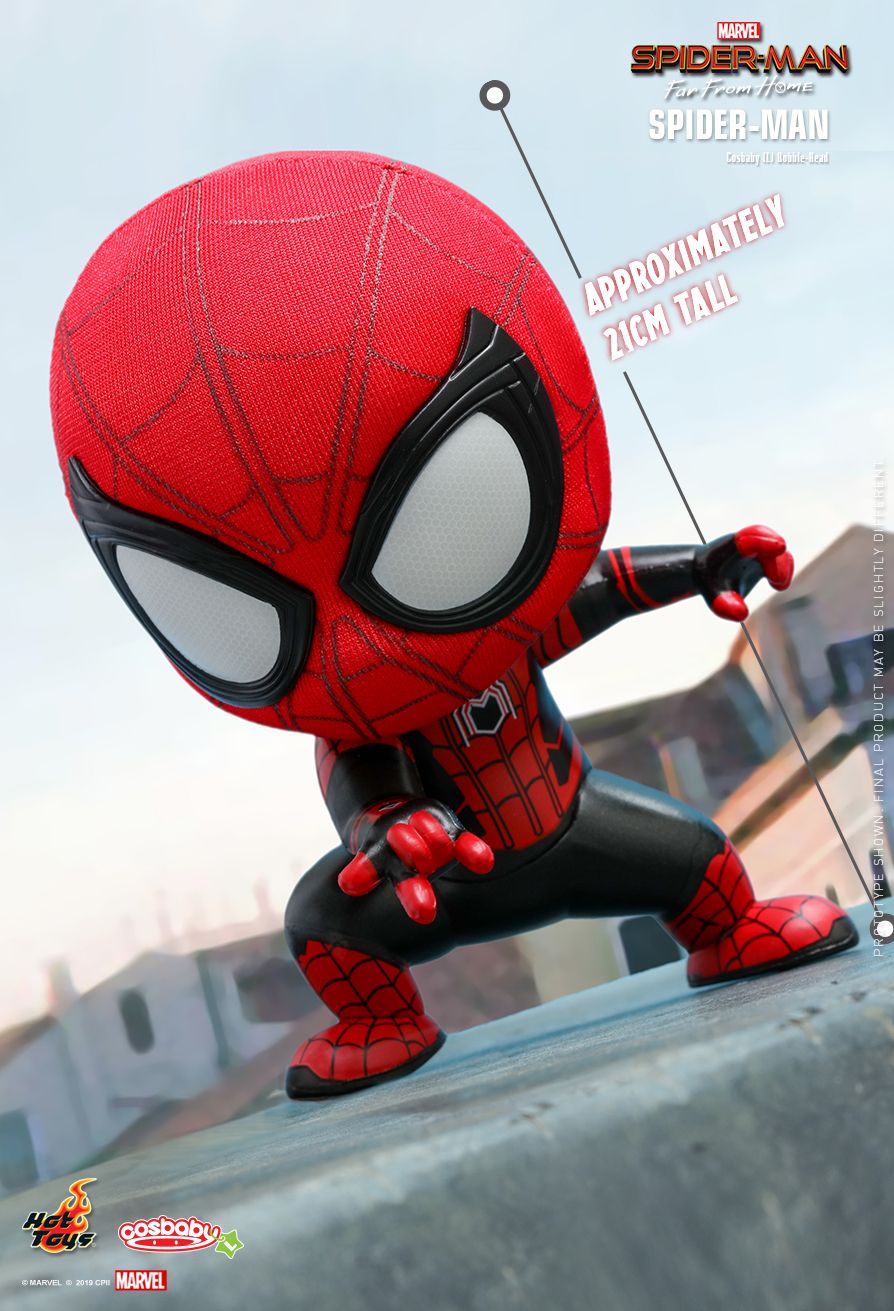 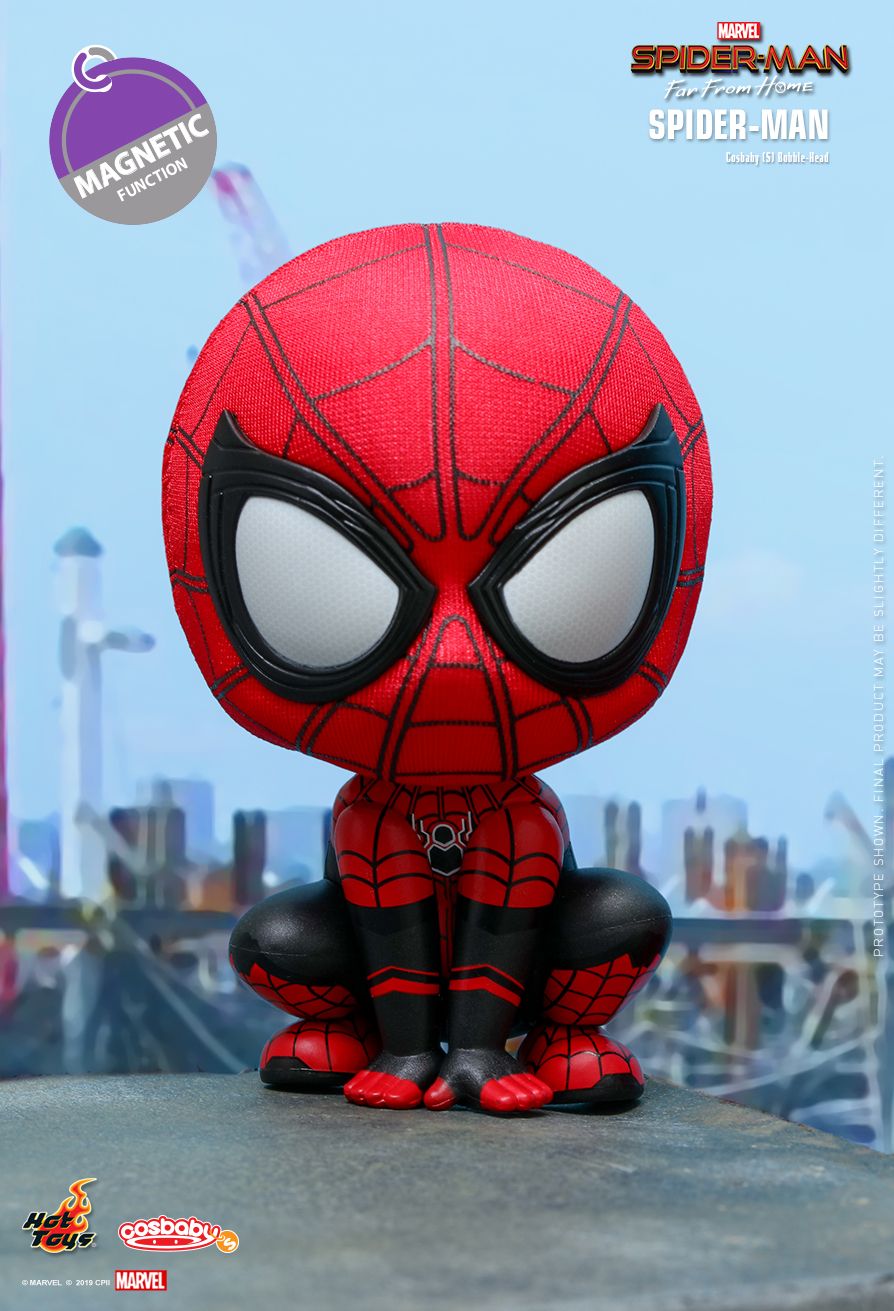 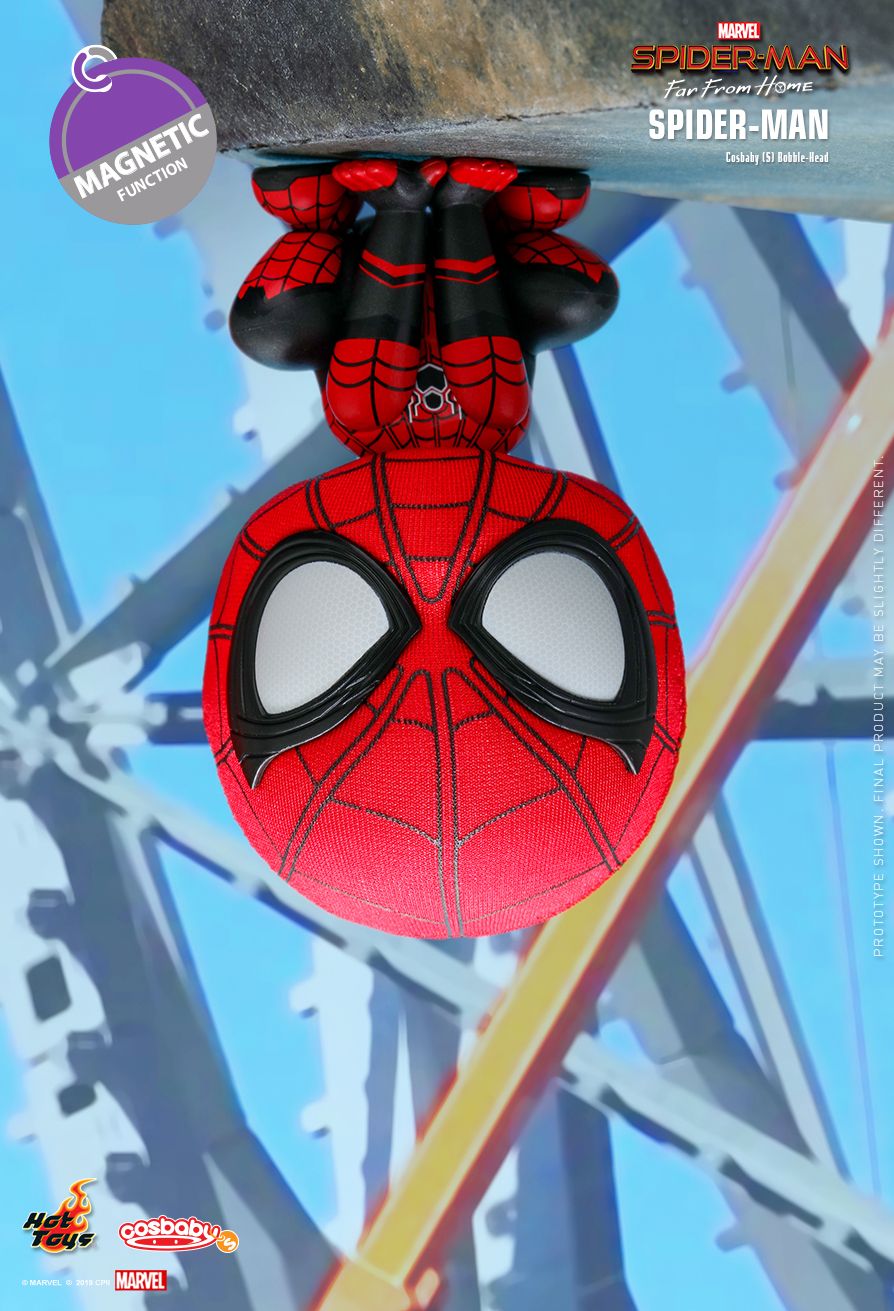 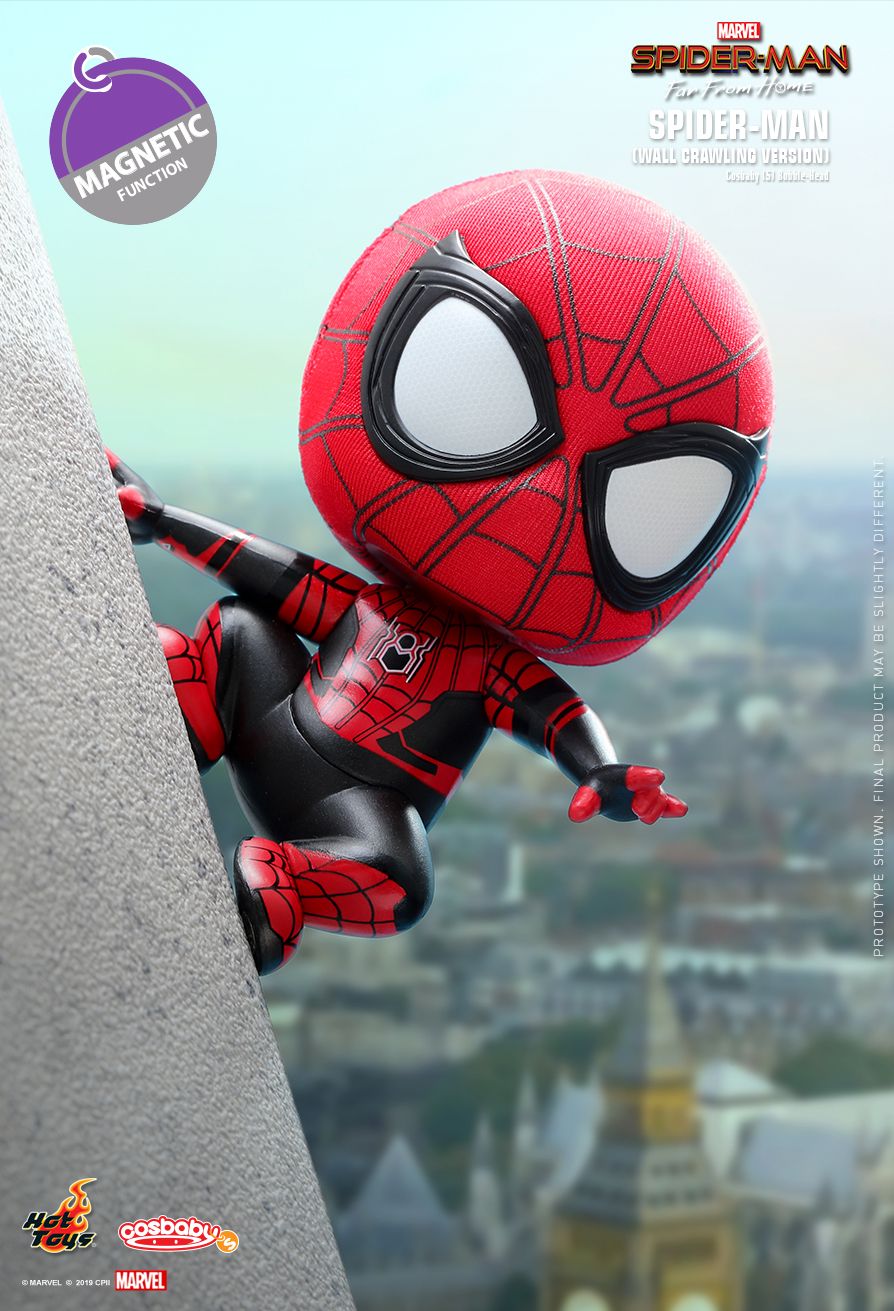 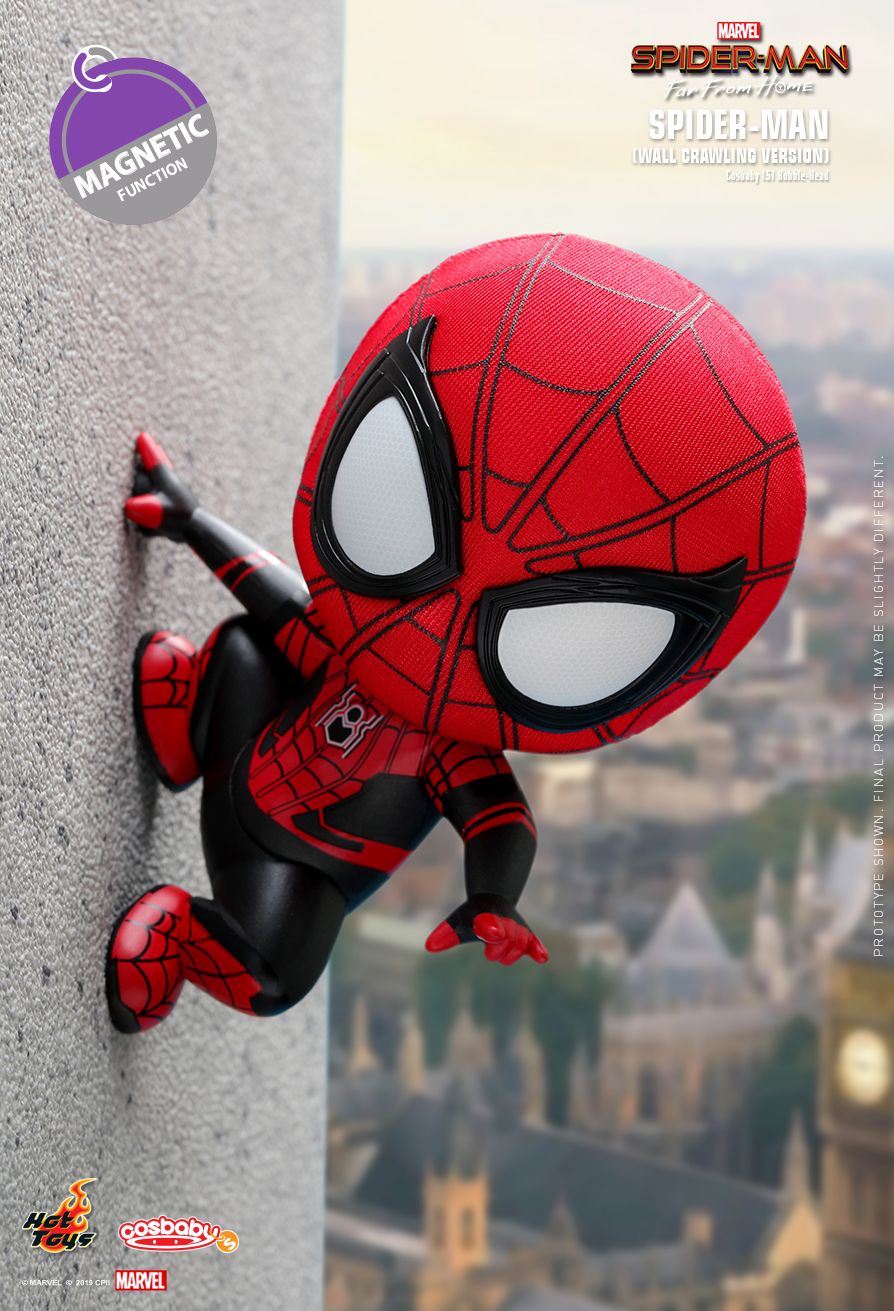 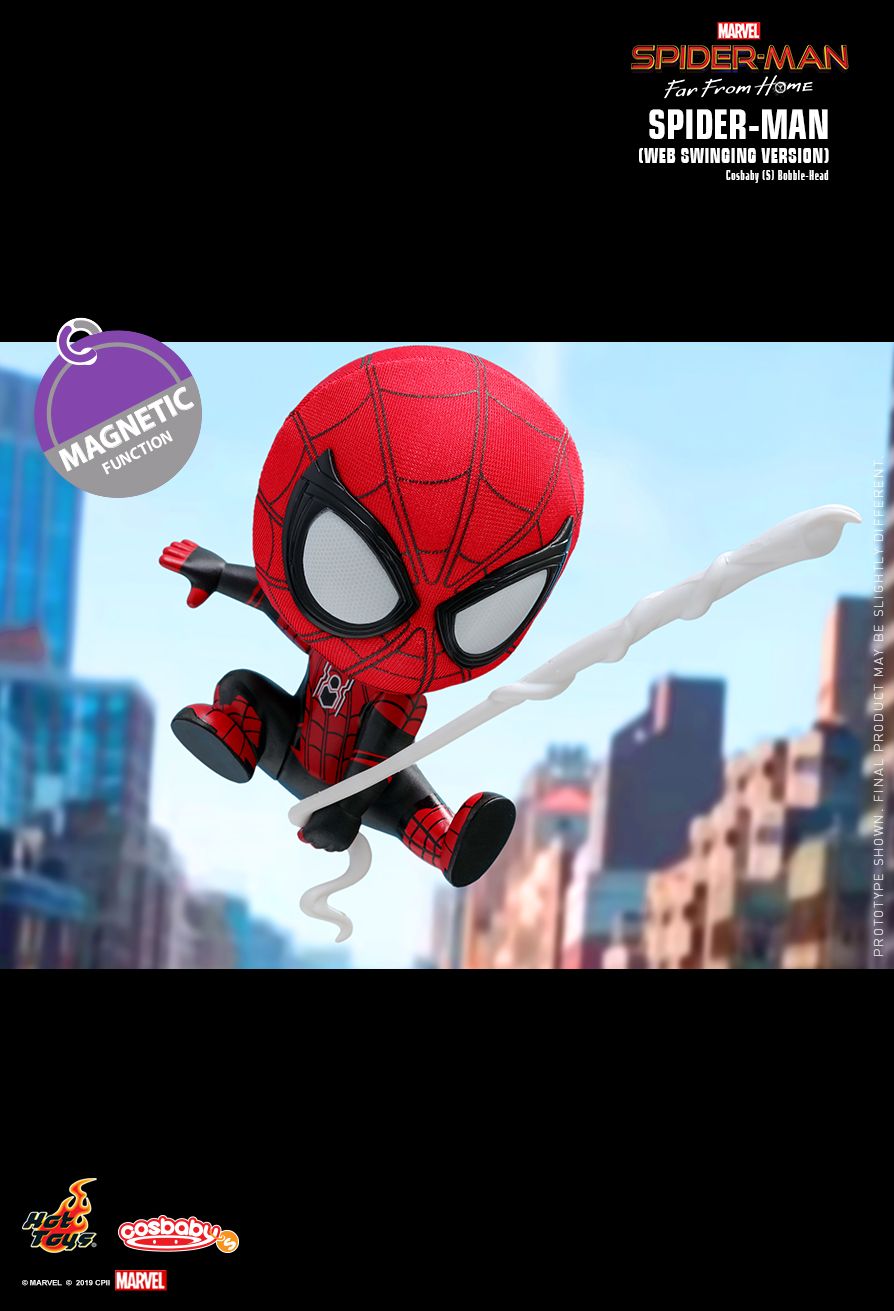 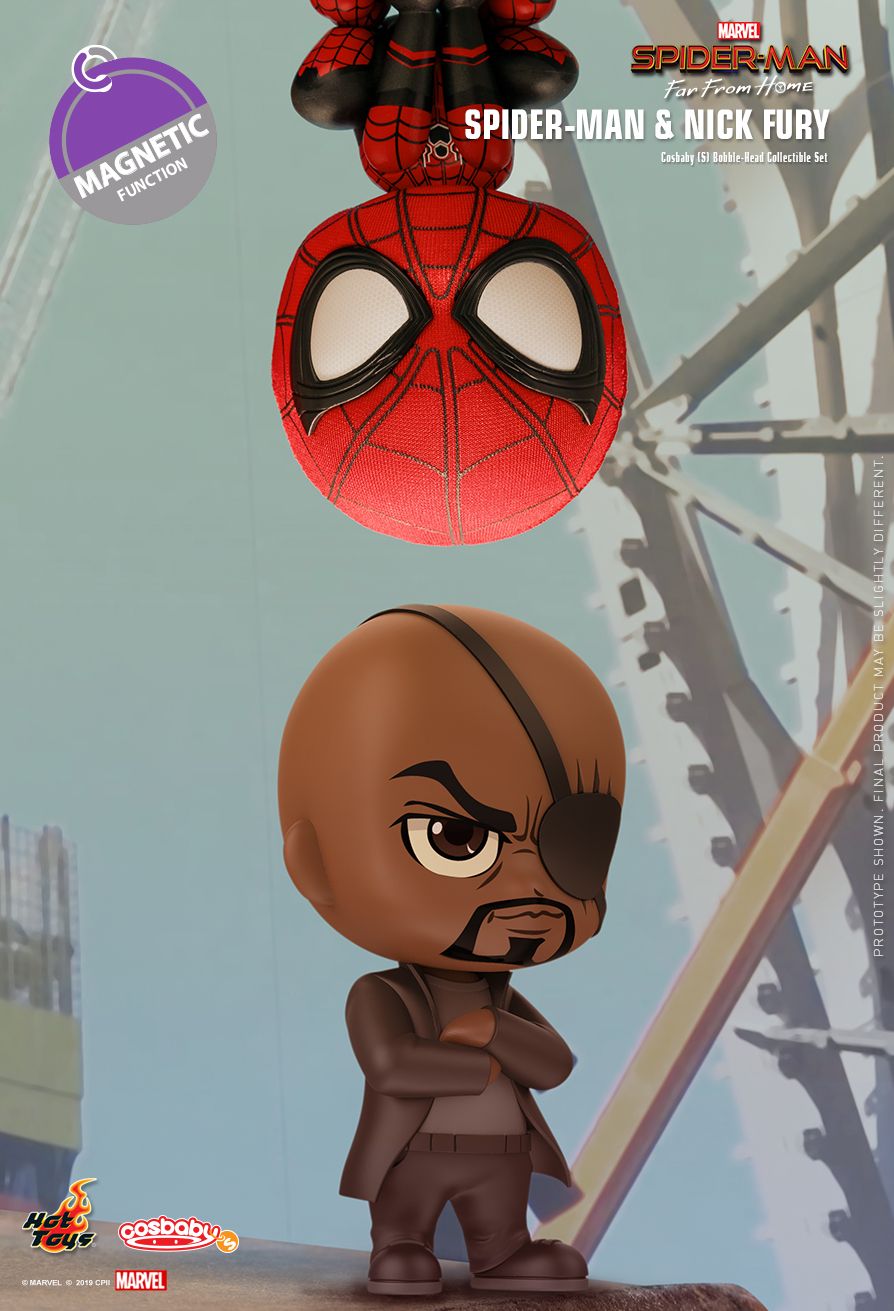 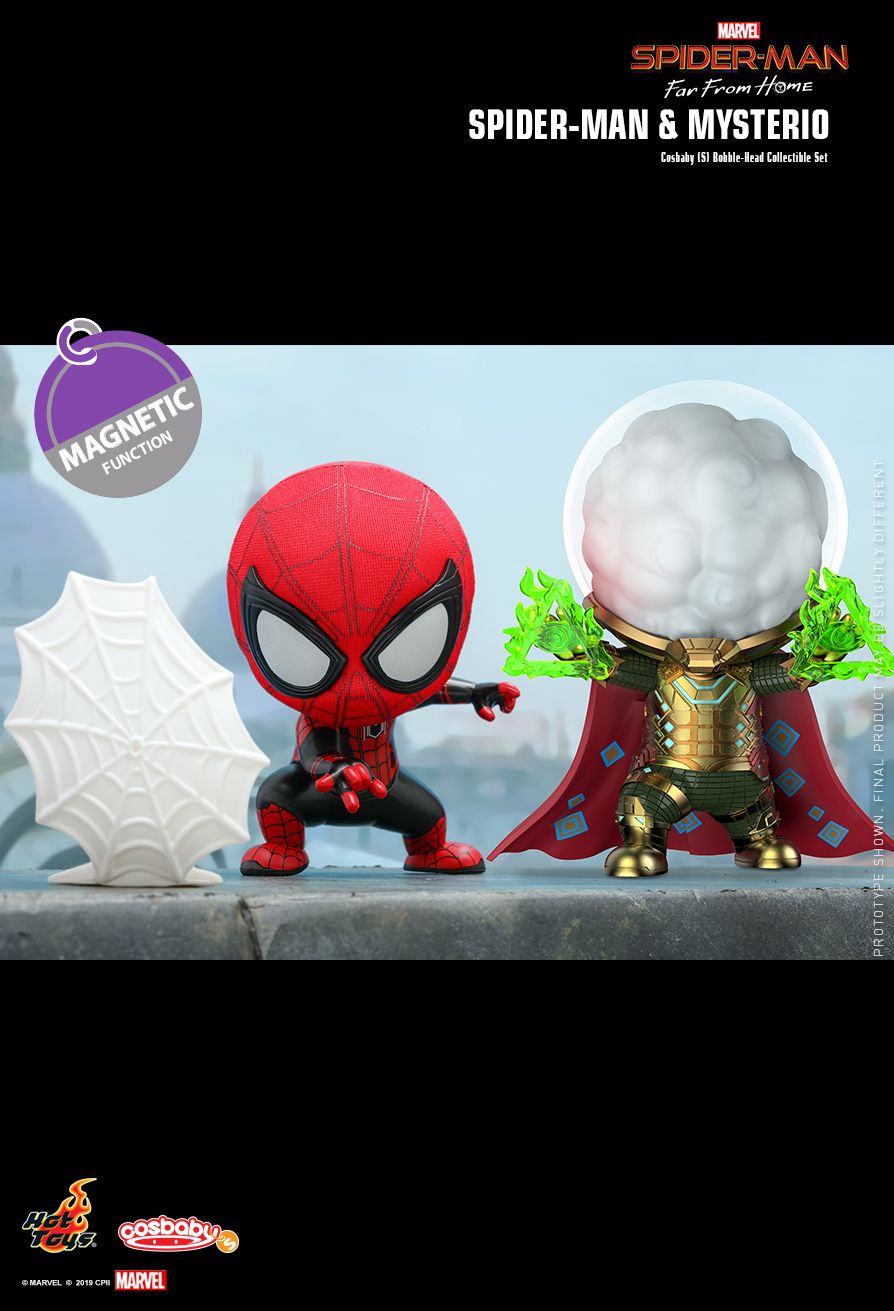 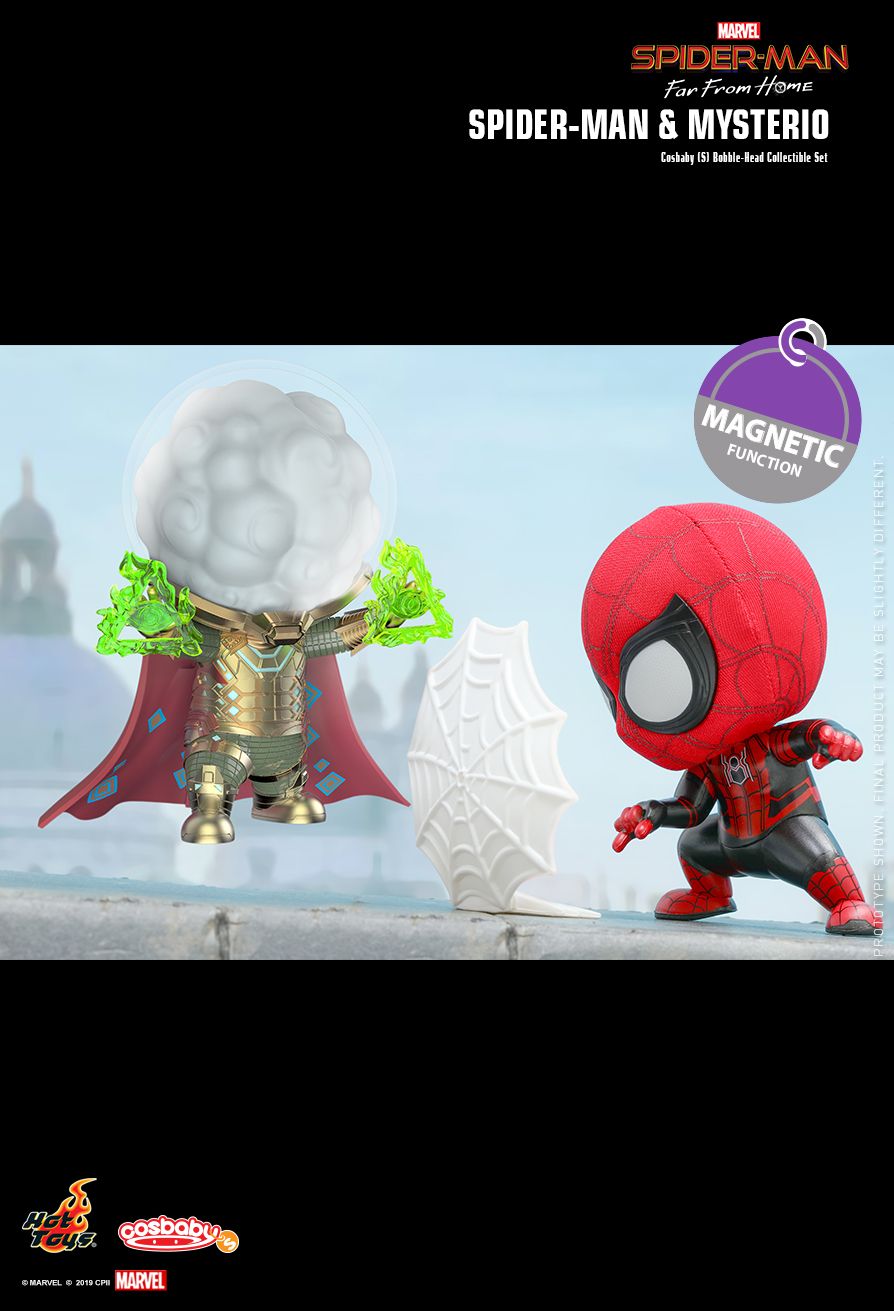 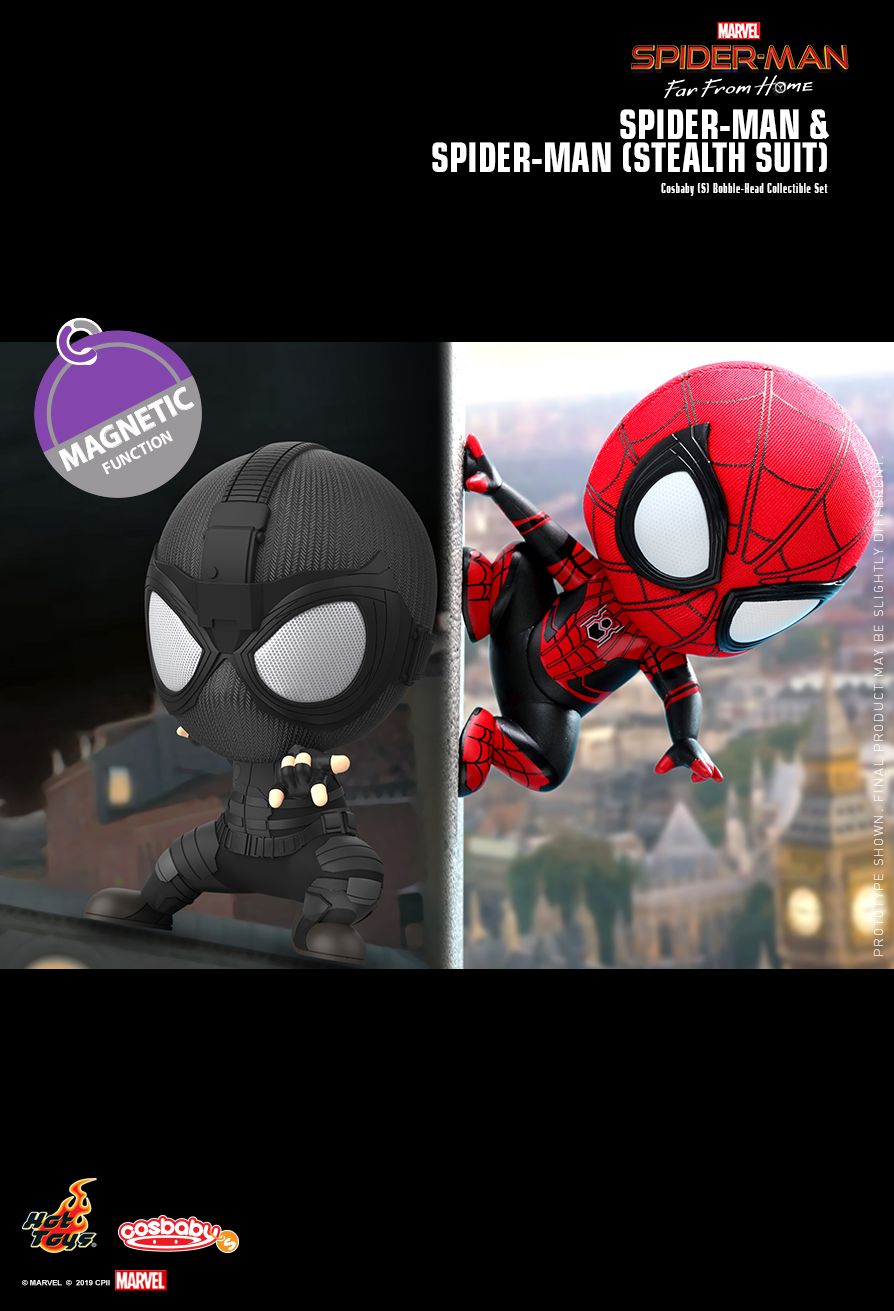