ENTERBAY is proud to present the T-1000 HD Masterpiece quarter scale figurine from the movie Terminator 2: Judgment Day. The T-1000 collectible is created based on Robert Patrick as T-1000 in the movie, a more advanced Terminator than T-800 portrayed by Arnold Schwarzenegger. T-1000 is a fictional robot whose body is composed entirely of a mimetic poly-alloy (liquid metal) that allows it to assume the form of other objects or people of equal mass, rendering its capability in rapidly shapeshifting and recovery from damage. T-1000 is also able to liquify quickly and transform innovatively, including morphing its body parts into solid metal tools or bladed weapons, and flattening itself on the ground to ambush targets. It can also change its color and texture to simulate clothes and other nonmetallic materials. In Terminator 2, T-1000 mostly disguises itself as a police officer to gain trust, access information, and provide a benign appearance. ENTERBAY T-1000 is based on the final battling scenes between T-800, T-1000, & Sarah Connor in Terminator 2, where T-1000 paralyzed T-800 with a long metal stick. It then morphing its index finger into sharp awl to hurt Sarah Connor. Sarah revolt by shooting T-1000, resulting big hollow in its head and damages in its body, exposing the inner metallic alloy texture.

Terminator 2: Judgment Day, also known T2, is a 1991 science fiction action movie. This is a sequel to 1984’s The Terminator. Terminator 2 was a significant box office and critical success. It had an impact on popular culture, and is considered hugely influential in many different aspects. This is also one of the best movies of the time, we hope that we have created a great 1:4 scale collectible of T-1000 for all the Terminator fans and figurine collectors around the world. The fabulous HD Masterpiece: T-1000 would be the 3rd product we have released from the Terminator 2 – The Judgment Day series, we would like to let all the Terminator fans to own their very favourite hero and villain in order to remake the classic scenes from the movie.

Two incredible authentic and highly detailed likeness head sculpture of Robert Patrick as T-1000 in the movie Terminator 2: Judgment Day. One head sculpt is in normal condition and one is battle damaged with a big hollow exposing the inner metallic alloy texture.

A HD-14 ABS action body with more than 30 points of articulation.

Classic costumes from Terminator 2: Judgment Day – T-1000 in LAPD uniform, with the LAPD badge and name tag on the shirt, and white strip along the seam of the trousers. The shirt is specially made with soft metallic nets inside for magnetic attachment of the liquify damaged bullet holes. The uniform also comes with a synthetic leather belt.

5 pieces of liquify damaged bullet holes with magnets, so that it can attach to the shirt with soft metallic nets inside, to simulate its battled damaged body.

1 Pair of boot in normal form

1 Pair of boot in flattening liquify form to simulate the metal ground.

A Terminator 2: Judgment Day figurine stand, with an additional aluminium plate to simulate the floor of the steel mill. 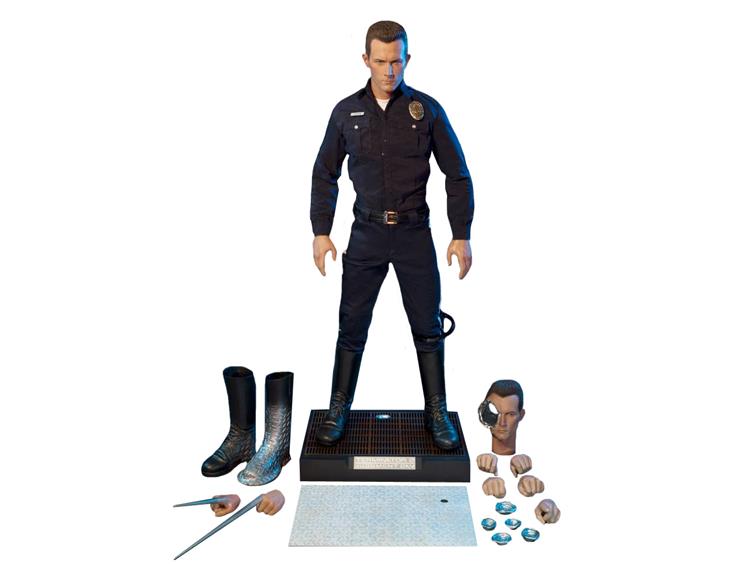 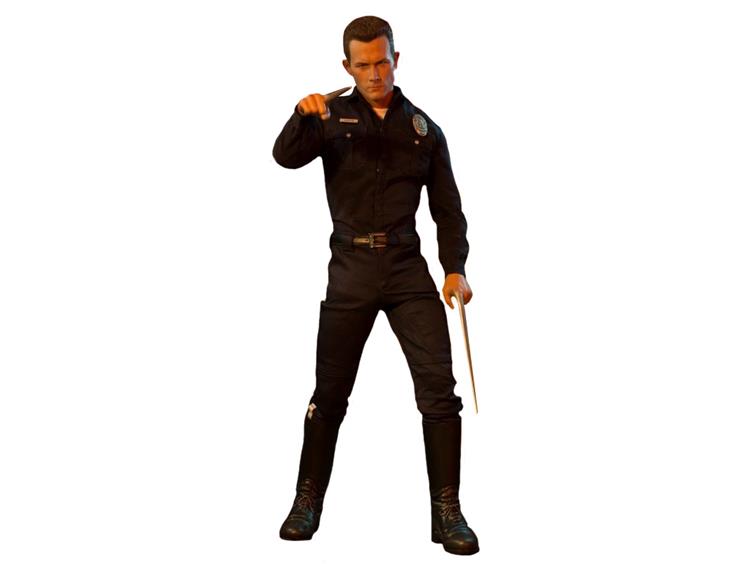 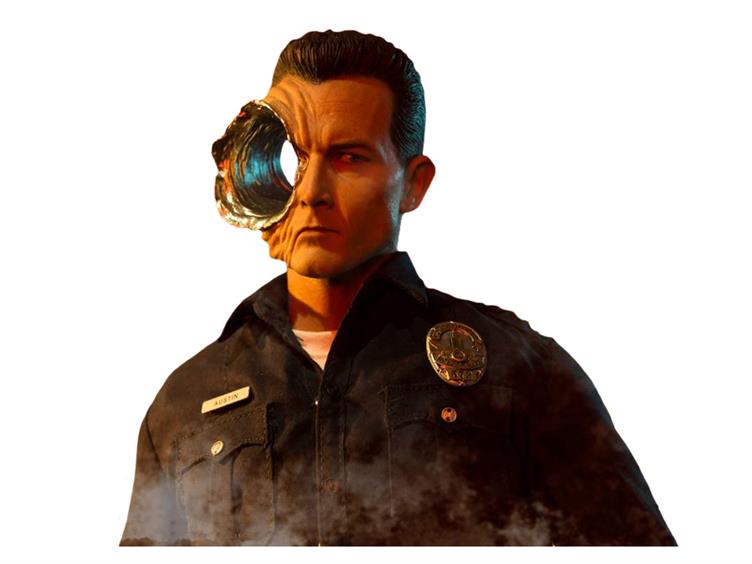 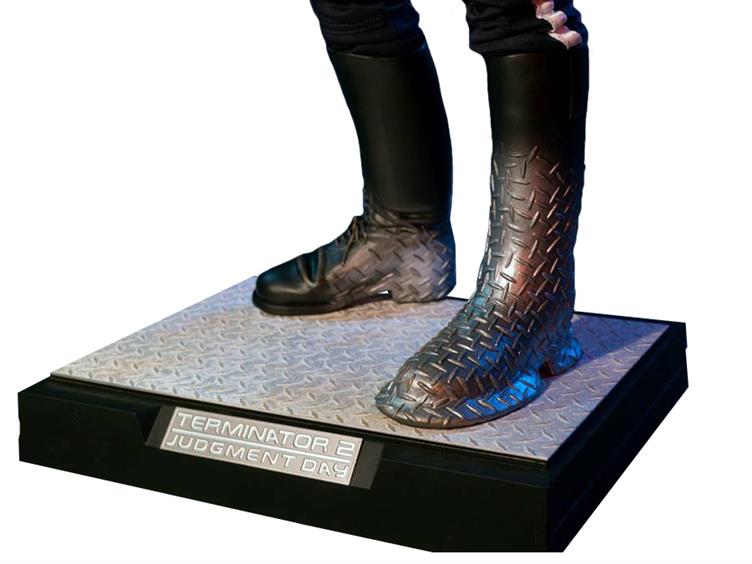