Join our analysts for live, interactive coverage of all major economic data at the DailyFX Webinars. We’d love to have you along.

The Australian Dollar slide on Tuesday following news of weaker business confidence in its home nation.

The indicator from National Australia Bank came in for June at 2, down from 7 in May. It’s probably worth pointing out that May’s surge was a bit of an outlier, rooted in hopes for lower interest rates and relief at the results of that month’s Federal elections. Readings in the 2-3 area have been much more common since late 2018.

Firms’ assessment of current conditions limped up to 3 from 1, but there was more optimism around the employment sub-index. That rose to 5 from 2. However, there was no escaping the overall gloomy tenor of the release. NAB said that business appeared to have lost ‘significant momentum’ in the past year and was not at all confident that the last quarter saw any pickup.

AUDUSD was already under some pressure before the release, and duly sank a bit more after it.

On its broader, daily chart, it’s clear that action is really driven by the ‘USD’ side of AUDUSD. The Aussie bounced from 2019’s low as the market moved to price in more interest rate cuts from the Federal Reserve, only to stall again in recent days as strong US employment data forced a rethink. 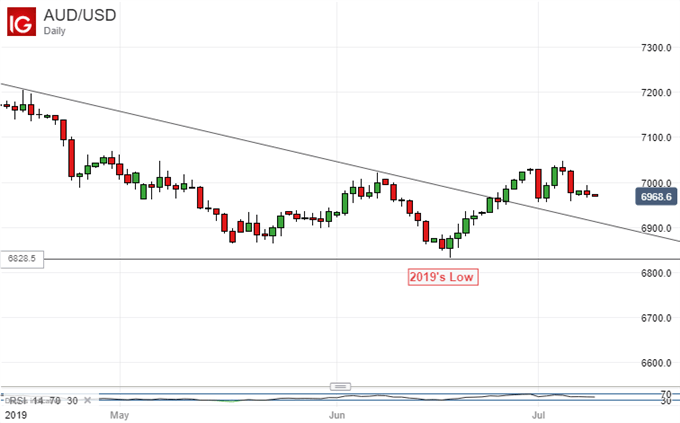 Given the multitude of Fed speakers on tap this week, most notably Chair Jerome Powell, it seems likely that the Greenback will continue to drive events.

However, at some point focus will return to Australian monetary policy. This year has already seen the first back-to-back monthly rate cuts since 2012, taking the Official Cash Rate down to a new record low of 1%. Another is currently fully priced into futures markets by the middle of next year.

Given that rate differentials favor the US Dollar and are likely to do so for a long time to come, it is difficult to get bullish on the Aussie, especially given Australia’s exposure to both sides of the US-China trade war.